Today is the 87th birthday of John George Vanderbilt Henry Spencer-Churchill, the 11th Duke of Marlborough.  He is the grandson of Conseulo Vanderbilt.

Tonight, I’m watching the History Channel documentary – The Men Who Built America.  Specifically, the episode discussing Cornelius Vanderbilt.  It has been interesting to watch and I’ve learned quite a bit more about Vanderbilt.  Click on the picture below to get to a short video clip.

For the full video you’d have to purchase it, but you can also look for it at a local library. It’s worth a watch!

From the July 6, 1900 issue of the Roanoke Beacon Newspaper of Plymouth, NC.

George W. VANDERBILT is contemplating the erection of a handsome inn at Biltmore on the plaza near the office of the estate.

Today while at work, I heard a commotion outside my office window – heard clapping.  I looked out and saw a crowd.  Since I’ve just joined Instagram I’ve got picture-taking on my mind, so I took one.

Turns out it was for National Walking Day and a group had convened in front of the library to begin a 20-minute walk.

It was only after I took the picture when I realized that the Commodore mascot was in it.  How fun! If I’d known he was going to be there, I may have walked 🙂

The Biltmore Estate has a Facebook page and today I learned something — the upcoming movie, Hunger Games, was partially filmed near there.  I wonder what GWV would think? 🙂

There is a great discussion going on at the page though – name movies filmed at Biltmore!

Can you name a few?  Give up? Check out a list here.

Came across this while browsing some historical newspapers – it describes the Commodore’s letter of benevolence for Vanderbilt University. 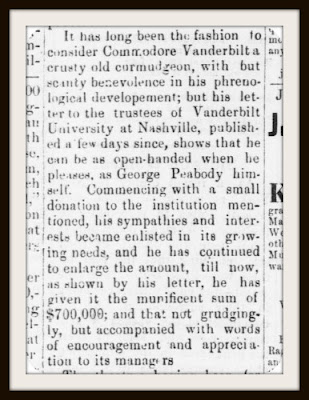 While doing some Vanderbilt research tonight, I cam across this photo of Nieves Orozco taken in 1947 by Fritz Henle. I thought it was just gorgeous so I’m sharing it here.

From the State Library of Florida’s online Flickr collection

Mrs. Cornelius Vanderbilt would be Alice Claypoole Gywnne – her daughters Gladys & Gertrude are also here. Several months later, Gertrude & Harry would marry.  I’m not sure which Cornelius this is in the photo, but maybe her son Cornelius?

I love it when I come across a new Vanderbilt connection.  :-).  This past weekend I visited Augusta, Georgia for a work conference.  While touring the Morris Museum of Art, the docent happened to make a casual reference to “the hotel that the Vanderbilt’s stayed at” called the Bon Air. Ooh! Vanderbilts & Augusta?

So, of course I have to look it up. And, interestingly enough, the topic happened to coincide with a comment I received on the blog back in September.

The Bon Air Hotel in Augusta, Georgia opened in 1923 and was one of 4 hotels the Vanderbilts established so they could cover every season.  It seems Alfred Gwynne Vanderbilt was the family member behind them (at least initially; he died in 1915).  The 4 distinct hotels were:

One article described them as such:

With the completion of the Bon Air Vanderbilt, the hotels under Mr. Marshall’s direction will provide every seasonal requirement; a winter resort in Augusta, a summer resort in Newport, an any-time-of-the-year vacation spot in Porto Rico and an all-year home or temporary stopping place in New York. — Morning Olympian newspaper 11/28/1922.

The hotel closed eventually and is now a residence for the elderly.  It looks like a beautiful building though. Wish I would have had time to at least drive by while in town.

Two Vanderbilt hotels I’ve now learned about within the past 30 days.  Kinda neat. 🙂

According to this excerpt, in the first city directory of New York published more than 100 years prior, the Van der Bilt’s listed were not members of the Commodore’s family.